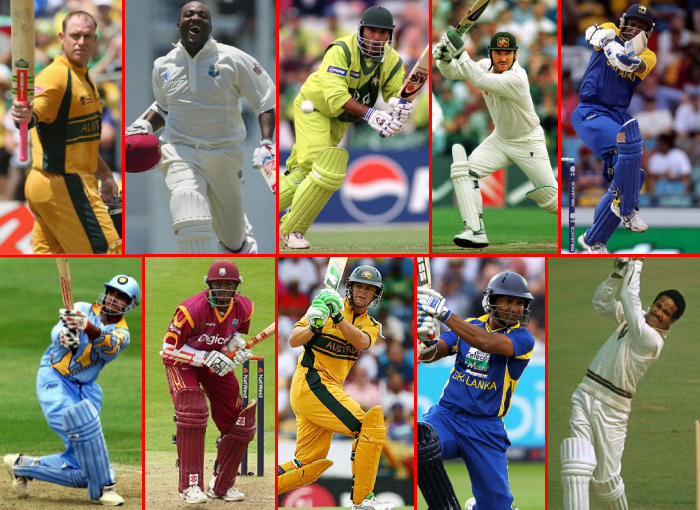 Here is the list of top 10 greatest left-handed batsmen of all time.

There were many left-handed batsmen in the game of cricket but only few were able to make their name.

Despite all these there are many who overcome this and made their name is books of cricket and here are top 10 of them.

Australian opening batsman Matthew Hayden had a fantastic career. He was a destructive opening batsman who smash bowlers back and front. He steps out and disturbs the rhythm of the bowler. He was also one of the finest test
batsmen of Australia.

Saeeed Anwar was one of those batsmen who relied on their timing and placement to get the runs. The wristy flicks were a trademark of his. In both Tests and one- dayers, Anwar contributed consistently and broke many records. He was the first Pakistani to score a century against India on Indian soil, and his 194 against India in Chennai was for 12 years the highest individual score by any batsman in limited overs internationals.

With 11,174 runs and an average of over 50, Allan Border had the most durable cricketing career for Australia. He was never a very flamboyant batsman, but a gritty run-getter who possessed a sound technique. Border’s batting was, however, overshadowed by his captaincy.

The prince of Bengal was one of the finest Indian batsmen of his time there was a time when he reached milestones before Sachin Tendulkar. He was a great player of offside his drives were delightful to watch. He was also well known for his captaincy as he introduced aggression to the Indian side.

Shivnarine’s open stance and the odd batting technique are bizarre to watch, but this style of his has been very effective for him. He rarely hits in the V and is an expert in guiding, pushing and nudging balls to gaps. He maintains an average of over 51 in Tests and 41 in the one-dayers, making him one of the most successful batsmen in recent times.

Another destructive opening batsman from Australia. Adam Gilchrist was wicket keeper batsman in Australian national team who plays at No.5 in test and was opener in white ball cricket. Whether to play in calmness or to play fast he can do both.

Clearly one the most calm, humble and best batsmen of all time his records speak themselves. He was finest of batsman in all formats of the game. He was also well known for his long duration batting in test cricket. He was the master in inning building and a great captain too.

Also Read: Team India’s 5 Cricketers who hit in ODIs, but failed in Tests

He was the not only one of the best left-handed batsmen of his time, but also a great bowler and a great fielder. His average of 57.78 is higher than Tendulkar, Sangakkara, Ponting and Jack Hobbs, and his unbeaten 365 was the world record for a long time. Sir Garry Sobers is unquestionably the finest all-rounder in the game.

Brian Lara was one the most popular and classic batsman of his era. West Indies star has several records after him. Most famous of them all is highest individual test score. During his era many great batsmen were also their but Lara managed to create his special and different identity. He was clearly best left-handed batsmen of all time. The way he played was just incredible and not only in his home but he scored runs all around globe.