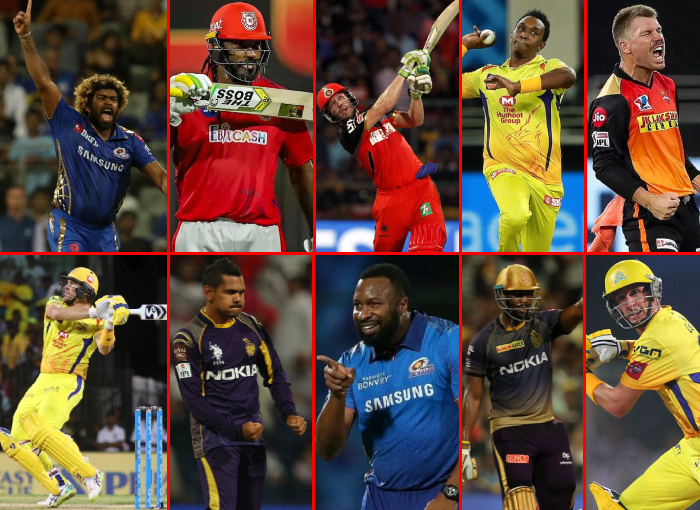 IPL is known for searching talent whether it is of India or overseas. There are many overseas who are from very starting of the tournament and made their impact in the tournament.

Below is the list of top 10 Overseas Players in IPL history.

Mike Hussey was a Chennai Super kings legend and he was known for his patience batting. He could play at top and middle order both. He scored nearly 2000 runs in IPL. He was orange cap holder in 2013.

One of the most destructive batsman of modern era Andre Russell is a total asset for Kolkata knight riders. He can contribute with his aggressive batting; bowling and he is a good fielder too. His best year was 2019 in IPL.

Another destructive batsman from West Indies Kieron Pollard is with Mumbai Indians from the starting. He won many matches to Mumbai Indians single handed. He is known for finishing the games. He can also accelerate whenever he wants.

One of the greatest spinners in T20 cricket Sunil Narine was an important Player for Kolkata knight riders in 2012 and 2014 in their title victory. He recently developed his ability to bat to he can open too and can bat in middle order.

Shane Watson was best all-rounder who ever played in IPL. He played for three different franchises in IPL. He can open with bat and with bowl both. He won title 2 times first with Rajasthan royals in 2008 and second with Chennai super kings in 2018.

David Warner or Mr Consistent was once a one man show for Sunrisers Hyderabad. He is a kind of batsman who can play according to situation. He does not throw his wicket easily. It was his batting which led Sunrisers Hyderabad there first IPL title in 2016.

The champion Dwayne Bravo is playing with Chennai super kings from initial stages of IPL. He is a brilliant asset for the team. In his early stages of career, he was more of a batsman who can finish the game but now he is a death over specialist, with his slower Yorkers he is just unplayable.

Mr 360 is one of the most lovable cricketers in the world. He with his batting style made Cricket fans fall in love with him. He can smash bowlers all around the park. He got a brilliant ability of six hitting. He is the most important batsman for Royal challengers Bangalore from starting of his career in IPL.

Universe boss or Chris Gayle is undoubtedly the best ever overseas batsman in IPL history. He with his style and six hitting ability is a nightmare for the bowlers. In his prime he was consistent too. His best IPL years was with Royal challengers Bangalore where he with AB De Villiers and Virat Kohli made a deadly top order but he is still lacking with an IPL trophy.

5 players with most wickets in single

Harshal Patel will be the purple cap holder of IPL 2021. In this article

IPL is world’s most difficult T20 league. Players here need to prove themselves to