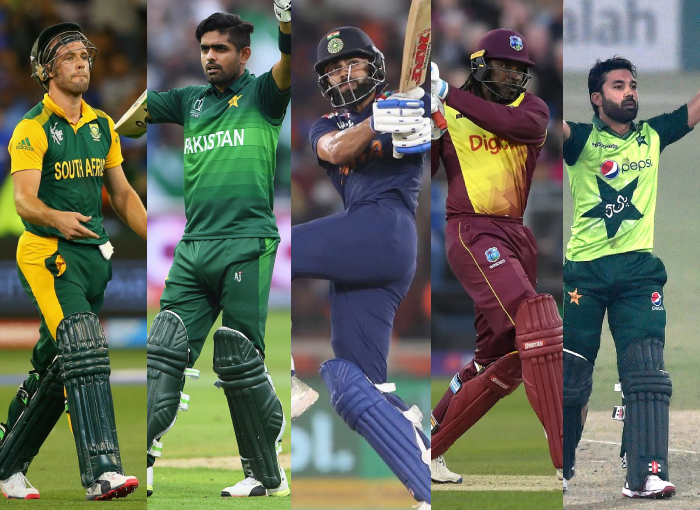 T20 cricket is all around we have two world cups in row, next one will be played in 2022. So, it will be fair enough to have some interesting T20 records and stats. So, in this article we will discuss about top 5 players with most number of runs in a calendar year in T20I.

Former South African legend and one of the most destructive batsmen in cricket history AB De Villiers is at number 5 in our list. He has scored 1580 T20I runs in 2019. De Villiers was considered to be one of the most difficult batsmen to bowl and when it comes to the shortest format, he was just brilliant.

Pakistan’s rising star and their current captain Babar Azam is Pakistan’s best batsmen in T20 format. He has scored 1607 runs in 2019 which puts him at number 4 in our list. Babar Azam has played remarkable cricket in past few years and scored many centuries and not only his performance we can also see the change in performance of Pakistan.

Virat Kohli who has just stepped down as captain of India team has many records after his name in T20 format. He also got the record of most fifties in T20 world cups. He is at number 3 on our list with his 1614 runs which he scored in 2016 in his prime. Virat was unmatchable in 2016. He was top scorer in 2016 T20 world cup and also top scorer in IPL with almost 1000 runs.

The universe boss, the T20 star and unstoppable Chris Gayle is best batsmen to ever play the T20 format. Chris Gayle rules this format like nobody else. He has scored 1661 runs in 2015 which puts him at number 2 in our list. Gayle is destructive opener batsmen from Caribbean and he still plays in the same way as he used to play in his early years or in his prime. Guy is full of positive vibes and really enjoys his batting.

Yes, Pakistan’s young opener and there rising star Mohamad Rizwan made his name to this elite list and not only he made his name in this list he tops the list with his 1676 runs in 2021 which is still not over. What an amazing year he is having with almost an average of 90 to 100. Rizwan and Babar Azam both revolutionised the Pakistan’s T20 cricket approach. They both ranks among top 5 in ICC T20 rankings of batsmen. But talking about most runs in a calendar year Rizwan tops our list.