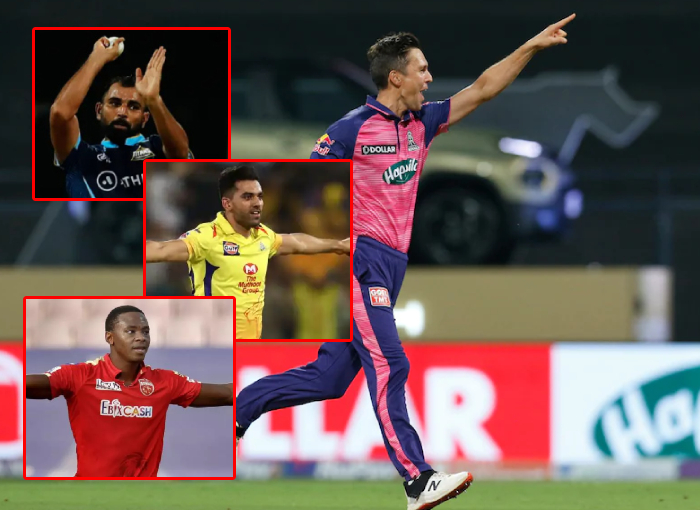 Getting a wicket in powerplay is a very crucial thing for any team. Early wickets can give a good start to the team which can change the momentum in their favour. In this article, we will see the top 5 players with the most wickets in the powerplay in IPL since 2020 which means in the past three seasons.

South African right-arm fast bowler, Kagiso Rabada is one of the best in IPL in recent seasons. He is a wicket-taking bowler and can bowl in any situation of the match. Since 2020 Rabada took 15 wickets in the powerplay. He was the highest wicket-taker for Delhi Capitals in the previous two seasons.

The last two years had gone very well for RCB pacer Mohammad Siraj. It was his form that gave a lot of strength to RCB’s bowling. Siraj also has 15 wickets in powerplay since 2020 in IPL.

Swing fast bowler Deepak Chahar developed as a proper powerplay bowler for CSK. Chennai depends on him very much for early wickets and he has not failed to do so. Since 2020 Deepak has had 17 wickets in the powerplay for CSK. Unfortunately, he was not available for the 2022 season and his absence can be seen in CSK’s performance this season.

From a proper test bowler to a dangerous white-ball bowler, Shami has come a long way in his career. Mohammad Shami has shown his class in IPL and we all know he is very dangerous with the new ball and that is why he has 22 wickets in powerplay since 2020. He is playing for a new team now and for Gujarat, Shami is taking early wickets.

As they say left is right and Trent Boult is a perfect example. No other bowler can match his ability to take wickets with a new bowl. Boult with his swinging yorkers becomes very dangerous, especially with the new ball. He bowls 2 to 3 overs in the powerplay and managed to get at least 2 wickets. He is also very economical in the powerplay. Since 2020 Boult took 28 wickets in the powerplay.