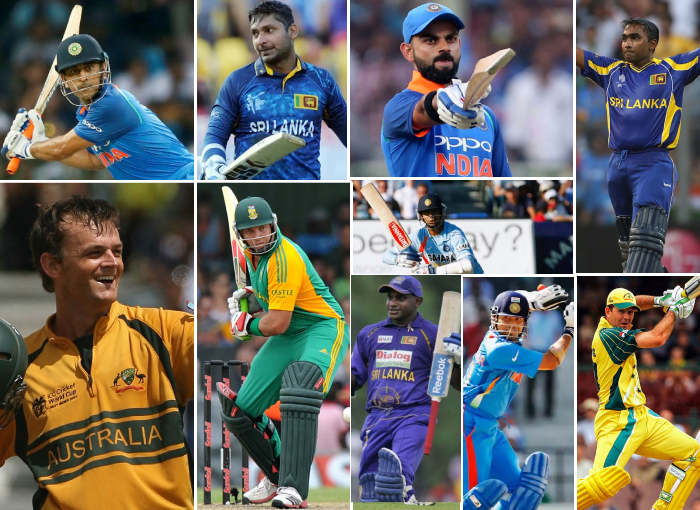 Cricket is the second most famous sports watched by huge audience. There is large number of cricket lovers across the world. There are many players in the history of cricket who have achieved a different position in the world.

Former Indian cool captain MS dhoni has all the favor to be in the list of  top 10 ODI greatest batsmen. MS Dhoni has already claimed an average-strike rate combination which is the best rank ever. Prior to that innings, he had scored 5958 runs at an batting average of 50.11 and a strike rate of 87.22. Statistics prove that Dhoni has elevated his game, while Indian cricket has declined since the World Cup. He led the Indian team a unpredictable three ICC titles in six years.

Adam Gilchrist is greatest ODI batsman of all time because he won three consecutive World Cups from 1999 to 2007. In every World Cups finals he enrolled fifty plus score, he was the only player who ever to do so. He is one of the highest strike rate of 96.94. Gilchrist was loved by everyone, his performance beyond the boundaries is the greatest achievement of his career.

Jacques Kallis is well known for his broad shouldered represent South African team. With a batting average of 44.36. Kallis is a fine and forceful batsman.

Sanath Jayasuriya is a very successful left arm spinner who has played one day international cricket in the history of cricket. Due to his performance, today he is in the list of top 10 ODI best batsmen. He performed 445 ODIs scoring 13430 runs at an average of 32.36 with great strike rate of 91.20. Suriya has played 28 centuries and 68 half-centuries so far in his ODI career. Sri Lankan player Jayasuriya holds the highest record in ODI innings.

Kumar Sangakkara is a best left-handed batsman. Sangakkara is such a batsman who has made a great record of scoring more than 10,000 runs in both Test and ODI. He also captained on different occasions but could not win even after coming so close to the 2011 World Cup.

Mahela Jayawardene has scored more than 12000 runs in ODIs and Tests along with the best captaincy during his tenure. He has overcome many challenges and has become one of the best batsmen of his time.

One of the last players of the classical test match, Rahul Dravid, the Indian player who has scored more than 10,000 runs. The wall, a strong pillar of the Indian team, suddenly retirement from international and domestic cricket in 2012, which made his followers very sad.

Indian team’s aggressive captain Virat Kohli is the greatest ODI batsman ever in ODI history. Virat has scored 12169 runs in the format with an unreliable average of 59.07 and a strike rate of 93.17. Kohli has scored 43 centuries in ODIs so far and it is expected that he will soon reach the target of 100 centuries.

Australian player Ricky Ponting is one of the great match winners as well as greatest captain of his time. He scored 13704 runs in 365 innings played in ODIs, which includes 30 centuries and 82 half-centuries. One of the highest run scored at an average of 42.03 with strike rate of 80.39.

Indian legend Sachin Tendulkar is one of the best batsmen to have achieved Bharat Ratan. He has achieved almost all the big records of international cricket. In ODI’s career, he has scored 18426 runs which includes 49 centuries and 96 half-centuries, Sachin scored these runs with an average of 44.83 with a strike rate of 86.23.