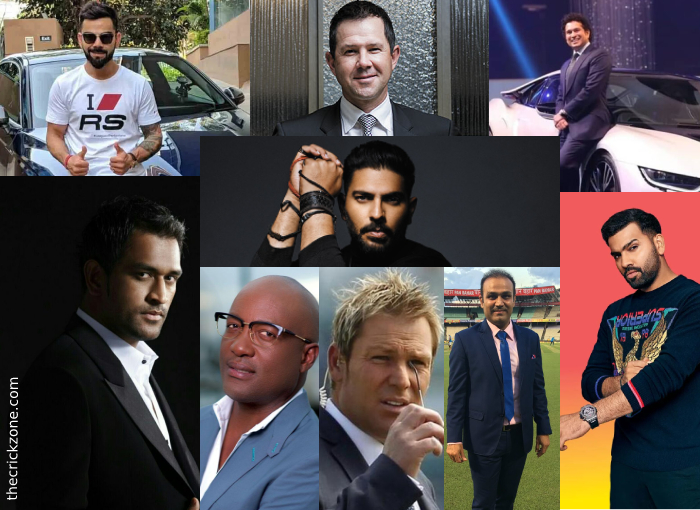 Master Blaster Sachin Tendulkar, who has ruled millions of hearts in the world with his batting and his best game, is also ahead of the rest of the players in terms of net worth. He has a net worth of about 870 crores.

Mahendra Singh Dhoni, the former captain of the Indian team, may have stepped down from the captaincy but he is still a part of the IPL and India’s ODI team. Also, he is considered to be the most expensive player in the advertising world. According to the report of Forbes, Dhoni has a net worth of 840 crores.

Virat Kohli, the captain of the Indian team and one of the world’s favorite batsmen, has a net worth of about 696 Crores. Virat had recently signed a deal of about 100 crores with a company, which no cricketer has done so far.

Ricky Ponting, one of the best batsmen and captains in the world. This player, who won the World Cup for Australia twice in his career, is currently the owner of a total of 492 crores. Ponting’s main source of income is his brand endorsements and his commentary for several channels. Apart from this, he is also a cricket expert in many ways. And also the mentor of Mumbai Indians.

Brian Lara, who was the best captain of the West Indies, is the richest player in the world. Brian Lara has a net worth of 454 crores.

Shane Warne, a former Australian player and one of the world’s greatest spinners, is the richest cricketer in the world. This bowler, who has taken a total of more than 1000 wickets in his career, is the owner of assets of about 394 crores. The bowler, who said goodbye to cricket in 2007, has many brand endorsement deals and also does cricket commentary for many channels. Apart from this, he is also the mentor of IPL team Rajasthan Royal.

Indian team’s explosive batsman Virender Sehwag is at number eight in the world in the list of rich players. His net worth is 303 crores. Sehwag holds the record for the fastest 300 runs. In the IPL, Sehwag played the 2008 and 2009 seasons as the captain of Delhi Daredevils.

Fighter King Yuvraj Singh of the Indian team is included in the list of richest players. Yuvraj won the Player of the Tournament title in the 2007 T20 World Cup and 2011 ODI World Cup. Big brands like Puma, LG, Reebok, Xbox, Revital, Pepsi are associated with Yuvraj Singh. In the years 2014 and 2015, Yuvi was the most expensive player of the IPL, to be bought in the auction. In the 2015 auction, he was bought by the Delhi Daredevils team for 16 crores. His net worth is 265 crores.

Australian cricketer Steven smith has impressed the entire cricket world with his batting exploits in the past years. Steven smith’s net worth is estimated to be around 234 crores.