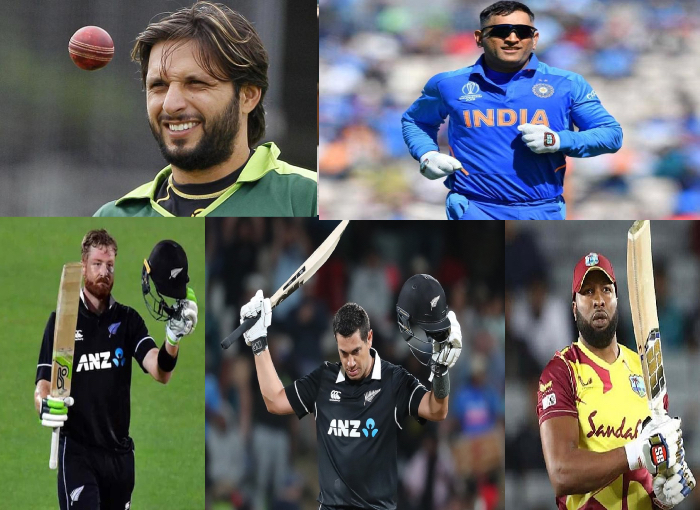 The game of cricket is becoming the most favorite in the world. Players make records in almost every match. Sometimes a batsman makes a record by hitting long sixes, and sometimes bowlers make a record by taking wickets. In the game of cricket, players mostly like to hit sixes and fours to score fast runs.

Shahid Afridi scored a century in just 37 balls against Sri Lanka in the year 1996. This record of his could not be broken in the entire 17 years. Afridi, who has played 398 matches, has 351 sixes in his name. Afridi batted in 126 innings to complete his 100 sixes.

In the initial game in Team India, Dhoni’s identity was made only due to the spectacular sixes. Talking about sixes, Dhoni has hit 204 sixes in 249 innings of a total of 287 ODIs. Dhoni played only 123 innings to complete his 100 sixes. When Dhoni scored 183 runs against Sri Lanka, he had hit 10 sixes.

Martin Guptill, one of New Zealand’s finest batsmen, remains in the headlines due to his explosive fours and sixes. Guptill, who played an innings of 237 runs in the 2015 World Cup, hit 11 sixes. Guptill, who has batted in 141 innings in 144 ODIs, has hit a total of 137 sixes. He had completed his 100 sixes in 120 innings.

Ross, who has batted in his own style, has played 188 ODIs for New Zealand, Taylor has batted in 174 innings and has hit a total of 121 sixes. He had completed his 100 sixes in just 116 innings. Taylor has so far scored 17 centuries.

West Indies’ stormy batsman Kieron Pollard has played 101 matches for his team, in which he has hit 110 sixes while batting in 95 innings. Pollard took a total of 86 innings to complete his 100 sixes. In this sense, Pollard had completed his 100 sixes in a very short time.